CFD in AIAA’s Year in Review 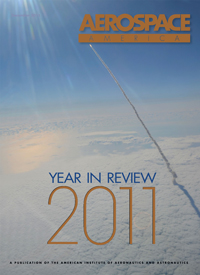 This month’s issue of Aerospace America is my favorite of the year: the annual Year in Review issue. Each AIAA technical committee (TC) writes a 1-page article about the past year’s notable events in their field of expertise. It’s the only issue of the magazine that I keep and I have issues going all the way back to 1980. It’s always interesting to see the broad impact CFD has on all these different technology areas.

The Aerodynamic Measurement Technology TC wrote about laser tomography measurements of temperature at the exit plane of a turbojet engine that will be used to validate CFD simulations of combustion instabilities.

Not surprisingly, the Applied Aerodynamics TC covered quite a bit of CFD-related activity. Data collected during tests of a full-scale UH-60A rotor system in the 40×80 wind tunnel at NASA Ames are already being used to identify deficiencies in CFD models. In other work, a coupled CAD-CFD methodology has been used by a NASA, Lockheed, GE, Rolls Royce, Stanford team to define supersonic configurations with low sonic boom characteristics. New CFD tools were released by the DoD’s 12-year CREATE program: KESTREL v2 for fixed-wing aircraft and HELIOS v2 for rotary-wing aircraft. Also mentioned were CFD applications at NAVAIR including a simulation of shipboard  recovery of an F-35.

The Fluid Dynamics TC reported on a historic set of observations of the changing thermal patterns on the windward surface of the Space Shuttle during reentry at hypersonic conditions. These observations will be reduced to temperature data for use in improving computational simulations. At NASA Langley, CFD models will be validated using wind tunnel test data of supersonic retropropulsion, a technology for human exploration of Mars.

The Meshing, Visualization, and Computational Environments TC noted how CAD interoperability problems vex computational tools and the promise that tools like MIT’s CAPRI hold for improving that process. Overset mesh generation has benefited from projects underway at Penn State and Pointwise. And a priori mesh quality metrics remain a topic of great interest as evidenced by a DoD/AIAA mesh quality workshop.

In the article by the Aerodynamic Decelerator Systems TC, the use of CFD for unsteady simulations of parachute inflation and a parachute cluster system was cited.

Validation of a turbulent flow CFD simulation of small scale hot air balloons was reported by the Balloon Systems TC. These balloons are candidates for future planetary missions.

The Legal Aspects TC did not mention CFD at all. This is probably for the better.

Fluid dynamics modeling, which I infer to include CFD, was cited by the Society and Aerospace Technology TC as one of NASA’s spinoffs to society.

Computational methods are mentioned throughout the report from the Propellants and Combustion TC. In addition to traditional the traditional RANS approach, work is being done on blended LES/RANS. Computational chemistry plays a major role in these types of simulations and therefore progress has been made on ethylene species modeling. Simulation is also being used to gain insight into the transition of subsonic flames into supersonic detonations.

Reading about all that CFD makes me imagine all the grids being generated. Good times. But there are probably several CFD citations that I missed so you should feel free to comment on this post and point them out. Aerospace America is available online at www.aerospaceamerica.org for AIAA members only. And if you’re doing CFD in the aerospace industry a membership in AIAA and involvement in a technical committee is something you really should consider.

This entry was posted in News. Bookmark the permalink.