The main purpose of a CAE plugin is to export a grid model. To do this, the plugin must convert the grid data as represented by Pointwise into a format supported by the solver the plugin is targeting. To do this conversion properly, you must have a thorough understanding of the Pointwise grid model (PWGM).

Through out this post, I will be referring to Handles. Handles are a compact way to uniquely identify any PWGM entity or element without using pointers. For those of you familiar with C/C++, a Handle can be considered the SDK’s equivalent of a C++ this pointer. The unstructured PWGM supports five Handle types:

Each Handle type has one or more SDK functions that is used to query the entity that the Handle represents. The SDK uses a function naming scheme in which the name’s prefix reflects the entity Handle being queried. For example, all functions beginning with PwDom take a PWGM_HDOMAIN as their first parameter (the domain’s this pointer).

Using Handles also reduces the number of arguments needed by SDK functions. Their use also permits simpler function calls in your plugin code. For example, without Handles, a block element function would need three parameters to uniquely identify a given PWGM block element:

You can also extract information from a Handle using various SDK macros. See the Modules/PWGM-API Opaque Data Handle Types section of the CAE Plugin SDK documentation for the details.

The unstructured PWGM is arranged in a hierarchy. The root of this hierarchy is the grid model itself. At export, the grid model’s Handle is passed to the plugin’s runtimeWrite() function using the PWGM_HGRIDMODEL model parameter.

In the cell centric view, the grid model consists of

In the face centric view, the grid model consists of

It is important to note that the same array of Vertices is used by both the cell centric and face centric views. As hinted to above, the vertices are the common relation that ties the two views together. The complete grid model hierarchy is represented in the figure below.

A gold star for anyone who noticed that the discussion above did not mention 2D grids versus 3D grids. That is because the PWGM makes accessing the grid data (mostly) independent of the grid’s dimensionality.

As in Pointwise itself, the PWGM supports both 2D and 3D meshes. However, there is one key difference. The PWGM provides the same interface to the mesh data independently of its 2D or 3D dimensionality. The uniformity of the PWGM is accomplished using five generic entities; Blocks, Domains, Elements, Vertices and Conditions. Specifically, from the PWGM’s point of view: 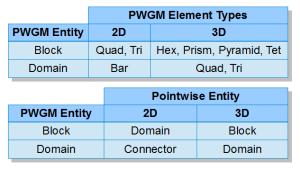 How boundary merging changes a Pointwise grid before it is passed to a plugin (cell centric view).

In the face centric view, the merging of boundary and volume conditions is not meaningful because Blocks and Domains only are accessed as cell and face Elements. The figure below illustrates how the same 2D Pointwise grid appears to a plugin for face centric views.

How a Pointwise grid appears to a plugin in the face centric view.

The PWGM provides enumerated, random access to all grid entities and their corresponding Elements, except for faces in the face centric view. Using this scheme, an SDK function is provided for each entity or entity Element to ascertain the number of items that exist in the grid model. The count then is used with other related enumeration SDK functions to step through the item hierarchy one by one. For example, the number of grid model blocks is determined using the PwModBlockCount() function. With this count you then enumerate the blocks using the PwModEnumBlocks() function. The PWGM enum functions return a Handle to the requested item. The top, model level function names begin with the PwMod prefix. These function all take a grid model Handle as their input and return either a count or a Handle to an enumerated grid model entity. The top, model level functions currently supported by the unstructured PWGM are

In addition to the Elements, each Block and Domain has an associated Condition. A Condition represents a Block’s Volume Condition or a Domain’s Boundary Condition. The Condition data is obtained using the functions listed below:

The grid model’s XYZ vertex data is obtained using the functions listed below. The specifics of a particular export format will determine which of these functions to use. See the plugin documentation for details.

The PWGM provides “streamed” access to the faces of the face centric view. They are streamed in the sense that the faces are made available to the plugin one at a time. Once the plugin has finished with a face Element, it cannot access the face Element again without restarting the stream from the beginning (unless you make local copies of the face data in the plugin).

We decided to use face streaming in the PWGM to minimize the amount of additional memory consumed during export. Pointwise does not explicitly store grid face information. As a result, to provide the face centric view, the PWGM needs to process the cell centric data and convert it to a face centric representation. Storing the full, face centric view for enumerated, random access can more than double the amount of RAM already required by the cell centric view. And, as many of our customers already know, large grid models can strain the RAM limits of many modern computers. The addition of non-streamed face Element data may exceed a computers available RAM and prevent some large grids from being exported at all!

A plugin initiates a face streaming session with a call to the PwModStreamFaces() SDK function. This function accepts a PWGM_ENUM_FACEORDER value, three callback functions, and a user-data pointer.

The optional user-data pointer can be set to null or it can be used to pass plugin specific runtime information to all phases of the streaming session. The user-data pointer is passed to each of the three callbacks.

The face order value controls how the faces are grouped during streaming. The supported orders are listed below.

The faces are streamed to a plugin using the three callback functions. The beginCB() callback is invoked by the PWGM once at the beginning of the streaming session. This callback receives the number of the boundary, internal and total faces that will be streamed.

When the plugin returns from beginCB(), the PWGM begins processing the cell centric data. As faces are completed, they are passed to the faceCB() callback. The information passed to this callback includes the face type (internal or boundary), the face vertices, and the block cell Elements on either side of the face.

After the last face is passed to faceCB(), the PWGM makes one final call to the endCB() callback.

The following example C++ code shows the streaming API in use.

Armed with an understanding of the unstructured grid model available within the Pointwise CAE plugin SDK, you should be able to create a plugin that adds your solver of choice to Pointwise. As always, if you have any further questions feel free to contact Pointwise support. We are here to help!

I will be covering the structured grid model in my next post. In the meantime, you can learn more about the PWGM by clicking on the button below.