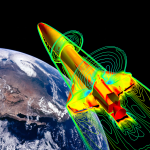 CD-adapco announced their annual calendar contest and began soliciting attractive and informative post processing of STAR-CCM+ results. The prize list consists of various consumer electronics gizmos including the obligatory iPad. Last year’s contest garnered over 100 entries so with competition like that it would probably be best if you got started on your entries now, well before the 31 October 2012 deadline.

New Releases of Pointwise and Gridgen

The T-Rex hybrid meshing algorithm’s ability to handle concave regions and it’s ability to reduce cell count by combining tets into prisms has been improved in the latest Gridgen and Pointwise releases.

Pointwise updated both our Pointwise and Gridgen mesh generation software for CFD.

Gridgen V15.18 includes many updates and improvements to the T-Rex technique for hybrid mesh generation with boundary layer resolution. These T-Rex enhancements are also available in Pointwise.