A mashup of two classic STL datasets, the teapot and the bunny, done using MeshUp.

MeshUp is a project on Kickstarter seeking $25,000 to develop a modeling tool for 3D printing that works directly with meshes (i.e. faceted geometry). You have little over a week to contribute and help them reach their goal. [As I write this, their pledges total slightly over $17,000.]

Proposed features of MeshUp include the ability to merge meshes from multiple sources, the addition of microstructures to aid in the structural integrity of 3D printed parts, mesh repair, and guaranteed watertight output for 3D printing.

It is important to note that MeshUp would be a standalone version of Symvol, a plugin for Rhino that has many of the same capabilities. 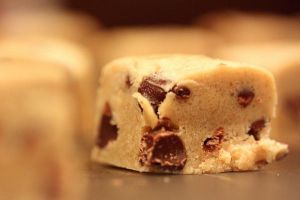 How will this cookie dough change shape under heat stress?

This is science you can sink your teeth into. [Poor joke but it had to be written.] I suppose within CFD only a mesh generator would be interested in the morphology of various materials and shapes so this study may have limited interest from that standpoint. However, in a beautifully illustrated study it is made clear that cookie dough loses its morphological integrity at a temperature of about 375 deg. F with about a 100% area increase and a 25% increase in circularity.

On ENGINEERING.com, Chad Jackson writes about a post on LinkedIn in which the poster opines that having engineers use CAD software to make drawings was not an effective use of their time. Back in the day, draftsmen [draftspeople?] would create drawings and would cost the company much less than an engineer. Now engineers get paid to do CAD.

Geometry, usually from CAD, is central to CFD. And at the same time it’s hugely problematic. For a while now I’ve been ruminating on a geometry-centric post here. My experience is that most CFDers don’t use CAD. Do you agree? If you had to, would it be a waste of your time?

A screen grab from Ruslan Khasonov’s typography made from carefully placed water droplets.

Inspired by seeing the world through raindrop covered eyeglasses, artist and designer Ruslan Khasonov created Lumen Type, a typeface made by carefully placing water droplets on a mirror and photographing them under various types of illumination. Be sure to watch the video.

10 Responses to This Week in CFD