CFDers at Stanford University ran a CFD simulation of jet engine noise on a supercomputer with over 1.5 million cores [not a typo – Ed.], the IBM Sequoia Blue Gene/Q system at Lawrence Livermore National Lab. The CharLES CFD code’s performance scaled all the way through 1 million cores. [I could not find any information on the number of cells in the mesh but I’m guessing it’s big, definitely over a million and a half.] 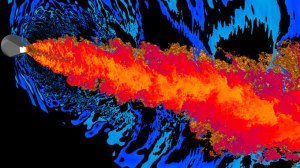 And the Oscar Goes to…

I used to be happy just to get a CFD solution to converge. So how would you like to win an Academy Award for your work? Fluid researchers from Cornell and ETH Zurich will be awarded with a “Tech Oscar” for their work on wavelet turbulence software used to simulate smoke in Hollywood blockbusters like Avatar, Battleship (and the upcoming) Iron Man 3.

Read the coverage from ISGTW, NSF, Cornell, and AMPAS.

Smoke simulations without (left) and with (right) wavelet turbulence. Image from nsf.gov.