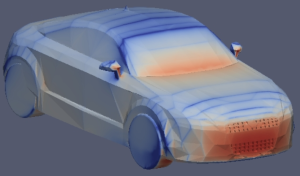 CFD solution from Aerodynamic on Demand.

How do the CAE simulation needs of small and medium sized businesses (SMBs) differ from other users? And how are simulation software providers addressing those needs? These are the issues addressed by a two-part series of articles from Desktop Engineering.

Part 1 focuses on CAD-embedded simulation from Autodesk, PTC, Siemens, and SolidWorks. Certainly a CAD-centric approach makes simulation more accessible for the non-expert engineer (because presumably they’re already very familiar with the CAD software). And all the vendors interviewed have also taken steps to streamline the entire simulation process, from problem setup to assessing results.

Part 2 is more about how providers of dedicated simulation software (Altair, ANSYS, CD-adapco, Dassault, Flow Science, Mentor Graphics, MSC, NEi) are addressing the needs of SMBs. ANSYS’ Barb Hutchings delineates SMBs needs as streamlining workflow, training, and facilitating availability of hardware and software. Training is an excellent point. If simulation tools are to be applied effectively by non-experts, providing learning materials is essential. Of course, the cloud comes into play as a mechanism for delivering to the user sufficient resources for what can be intense computations.

NEi’s Mitch Muncy closes the series with a good point. Instead of dumbing-down the software vendors should focus on smartening-up the users. [Intended in the best way possible. Do not infer anything from my wording.]

[And fortunately, I don’t recall reading the word “democratization” once.]

Didn’t I promise to not post anymore photos of spinning things covered in paint and the splashes and splats that follow? Here are two more. For the last time, I swear.

Fabian Oefner coats balloons in paint, pops them, and captures the results with high-speed photography in a series called Liquid Jewel.

Peter Schafrick coats tools and toys with paint and sends them spinning before snapping his pics.

1 Response to This Week in CFD