Screen capture from a video showing CFD simulation of natural ventilation in a steel mill. Video by Moffitt Corp. 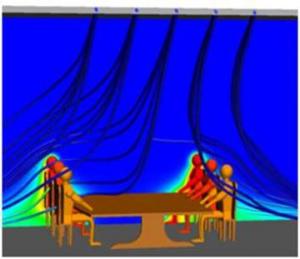 CFD simulation of heat coming off participants in a meeting about who’s mostly to blame for CFD inaccuracy. Meshing people on the left, turbulence modeling people on the right. Image from Building Design and Construction.

Daniel Hill is another artist whose abstract work reminds me a lot of mesh generation. He’s striving to “bring the power of sound into the visual experience.”

Bonus: What does art have to do with space travel? Plenty, in the case of the NASA Centaur Art Challenge celebrating the launch vehicle’s 50th anniversary.