Very cool video of a simulation of a long-duration EF-5 tornado. Click image for article.

CFD simulation for the purpose of evaluating pedestrian comfort. Click image for article.

There. I said it.

The folks at PADT blogged about their hatred of IGES files as a mechanism for transfer of CAD geometry in IGES Can’t Stand IGES Anymore! [Props for the wordplay.]

I am here to defend IGES’ honor.

Hating IGES is like saying you hate music on cassette versus LP. [Young people, ask a graybeard what a cassette tape is.]

Whereas PADT advises that IGES be your last choice for geometry import into ANSYS I’ll say that you should feel confident about using your IGES with Pointwise.

IGES is actually a pretty good format for sharing 3D geometry. (I am not alone in this opinion.) The format is well defined. It’s ASCII meaning that it’s readable. It takes very little time to become familiar with how an IGES file is laid out.

The problem with IGES files is that people write them in ways that explicitly violate the standard. One particular egregious violation is the definition of trimming curves. The file writer sets a flag that indicates whether the curves are defined in XYZ space or in the UV space of the surface being trimmed. That flag is often set incorrectly and the file reader goes to look for one type of curve or the other and can’t find it. Another example is the use of a string of points (what IGES calls copious data) to define a trimming curve. Unfortunately, that’s explicitly disallowed by the standard.

The result is that the file reader has to not just code to the standard but has to robustly handle non-standard files, a practice known as “flavoring” your IGES reader for files that come from specific sources (an IGES reader for CATIA, an IGES reader for Pro/E, etc.). You may infer that we have done a lot of that but we hide the flavoring under the hood.

To clear up some confusion, the IGES standard does include support for solid models, the so-called B-Rep Solid Model Object (entity type 186). So if you have a CAD system that will export solid models to IGES as 186s your reader should be able to import them.

In addition, we have implemented something (that works for all CAD import, not just IGES) that automatically assembles surface geometry into a solid (regardless of whether solid data exists in the file). On top of that, we’ve implemented something called quilting which is the ability to assemble multiple CAD surfaces into a single meshable region based on geometric feature lines.

Keep in mind also that when talking about CAD interoperability issues we need to distinguish between various error sources. One is accurate reading and writing of the file according to its specification. Another is the dreaded issue of tolerances and how they effect trimming and assemblies. Yet another is representation – how your CAD kernel represents a particular surface type may be different than how it is represented in the file you export to and different still from the way it’s represented in the system that must import it.

So learn to love IGES and we’ll all be happier.

Gridding Your Ceiling with Light

Interior designers are really embracing facets. First WoodSkin, then JOIN-Facet, and now LivingSculpture, a 3D modular ceiling installation consisting of individual quad OLED lights that can be arranged in a custom 3D shape and controlled interactively via an iPad.

Read more about LivingSculpture here and be sure to watch the videos. [Note: The page is written in French.] My office is going to get really cramped if I keep getting all this stuff. Also note that this is a logical extension of a 1970s era mirror ball. 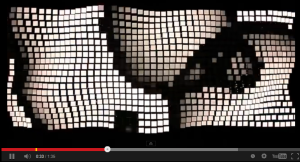 LivingSculpture 3D Modular OLED system. Screen shot from a video of the lights being manipulated interactively.