The December 2014 issue of NASA Tech Briefs included this year’s edition of their annual Analysis and Simulation Software Industry Roundtable in which several company executives are interviewed about the coming year.

You should read this article. Click the link above or the image below to access the article. 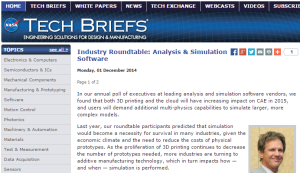 I was a bit surprised that the article opened with an exploration of 3D printing‘s influence (positive) on the use of simulation software. I had to think for a minute [a rare occurrence] on why that might be so. The consensus seems to be best summed up by CD-adapco’s David Vaughn who said that anything like 3D printing that reduces the time required to create a physical prototype necessarily requires more use of simulation early in the design process.

I was not surprised at all that the second topic covered was “the cloud.” Maybe it is just me [probably] but “the cloud” apparently means different things to different people. Is it the convenience of on-demand licensing? Is it the easy access to a big computing resource? Is it easier to use? Is it cheaper to use? Siemens PLM Software’s Mark Sherman seems to share at least some of my thinking as evidenced by his quote “…there’s nothing better for interacting with a large FEA model than local high-performance hardware.” [Mark, sorry to lump you in with my sorry lot.] I’m not nor do I suspect Mark is a Luddite, but we must have clear, consistent expectations with our customers about what we want to accomplish in “the cloud.”

Simulation data management was the third topic explored and rightly so. As simulation software has matured, the simulations have gotten bigger and more numerous. The manual, often visual, inspection of results to find the “needle in a haystack” has to be shelved. I just wish the magazine had included representatives from CFD postprocessing experts Tecplot, Intelligent Light, and CEI because they have all been making advances in the automated, simultaneous interrogation of multiple datasets.

MSC Software’s Dominic Gallello sums things up quite nicely, “2015 is the year that users should poke their heads up from their work to see what is out there. I think they will be amazed with the leaps forward.”

What do you think? Include your comments in the Reply area below.