During this past October, I had the pleasure of joining the Pointwise team on a trip to Japan for the 2015 VINAS User Group Meeting. VINAS (Visual Integration & Numerical Analysis Systems) is a Japanese company specializing in the distribution and support of numerous CAE and CFD products, including the Pointwise meshing software. At the conference, I was invited to present our open-source SU2 suite for CFD analysis and design (https://github.com/su2code), which was a great opportunity to reach a new audience.

The trip began in Osaka and ended in Tokyo. In between, I tried to maximize my interactions with Japanese food, culture, and of course, the people. Only an engineer would think of a trip like this as an optimization problem.

Getting Started in Osaka and Kyoto

Before leaving the US, many people encouraged me to explore and enjoy the food. Having been raised in the middle of the US away from the coasts, I was not well-versed in the seafood-heavy fare that I was about to find in Japan. However, upon arrival, I planned to completely immerse myself in the food. This meant two things:

I had an easy warmup with the chopsticks on some gyoza, which were relatively easy to grip with the sticks. Within a few hours, I was “immersing myself” into some fresh octopus. By the end of the week, I had sampled many of the well-known dishes: fresh sushi of all sorts, ramen, udon, tonkatsu, unagi, shabu shabu, and others. I’ll be having more Japanese food locally now with hopes of recapturing the magic and keeping up my chopstick skills.

A beautiful example of the high quality presentation that you can see in Japanese meals.

The dining experience brings out the amazing attention to detail that I encountered throughout Japanese culture. Presentation and ceremony play leading roles right alongside taste. Meals typically arrive in many small portions, each having its own vessel with distinct decoration and purpose. Shared dishes and rituals, such as refilling your neighbor’s glass when empty, really enhanced group dining.

One recurring trend that I had read about beforehand, but couldn’t quite appreciate until I experienced it, was the blending of old and new culture in Japan. I was repeatedly (and pleasantly) surprised when our group would fight through traffic or crowds on busy city streets only to have the entire hustle and bustle peel away within steps to leave us in an ancient shrine or temple. It was interesting to learn that more emphasis is placed on the location of the temple/shrine rather than on man-made structures or buildings sitting on it, which often come down and are rebuilt over time. As one might expect, these sites specialize in peaceful atmosphere and natural beauty. 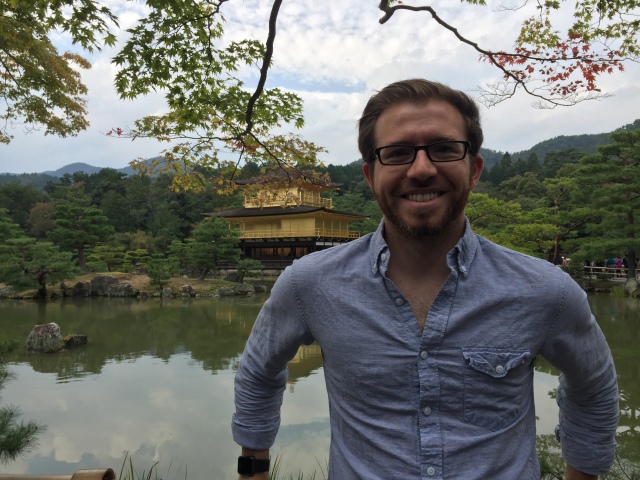 Visiting Kinkaku-ji (Temple of the Golden Pavilion) in Kyoto.

Other impressions from the Osaka / Kyoto area:

The first portion of the journey came to a close with a high-speed train ride to Tokyo on the Shinkansen line. Naturally, I went to the front of the train immediately and thought about how I would set up the aerodynamic shape optimization problem in SU2 for designing the outer mold line of the train’s nose and body.

The nose of a bullet train on the Shinkansen line.

After arriving in Tokyo, but before the start of the conference, we made a visit to the JAXA (Japan Aerospace Exploration Agency, http://global.jaxa.jp) Chofu research center, where the focus is on research and technology for aviation. During this visit, we met with the current developers of FaSTAR, an unstructured CFD code created at JAXA. We exchanged presentations on our strategies for solver development as well as our current and future directions.

While FaSTAR and SU2 contain quite a few similar features and methods, we have differing approaches in our development. SU2 is an open-source code, while FaSTAR is not, and this has important implications for our priorities as developers.

For example, our philosophies differ when it comes to flexibility and performance. In SU2, we deliberately favor in-house solutions over external libraries (when we can) and leverage object-oriented programming in C++ so that the code is easy for the community to understand, compile on many architectures, and modify. This is typically at odds with performance, and as a result, we have put in extra effort as a development team to maintain high performance with SU2. In contrast, the FaSTAR team has prioritized speed above all else. In that regard, they have achieved some impressive results in reducing the time-to-solution of Reynolds-averaged Navier-Stokes (RANS) calculations around realistic applications down to minutes on their latest supercomputing hardware (for engineering accuracy).

We also discussed high-performance computing (HPC) in general and our strategies for attaining scalable, high performance with the codes. Topics included emerging hardware architectures, how new architectures are affecting their parallel programming models, and where they see things going in Japan given recent upgrades to their HPC system (JSS2).

Similar to the current trend in the US, they are pursuing hybrid programming models to unlock the multiple levels of parallelism on emerging systems. We are both investigating the so-called “MPI + X” model, where MPI is used for coarse-grain parallelism across distributed memory systems while something else (the “X”) is used to achieve fine-grain parallelism within a single compute node (threading and/or SIMD).

Having spent some time at our NASA centers in the US, I should also mention that I felt very at home on the JAXA Chofu campus. If I squinted hard enough, I could imagine it as NASA Langley or Ames given the similar layout and style to the buildings.

The 2015 VINAS Users Conference was held in the Tokyo Conference Center Shinagawa. The overall themes of the conference were open-source CFD solvers (Day 1), pre- and post-processing for CFD (Day 1), turbomachinery design and optimization (Day 2), and HPC cloud computing and high speed calculation (Day 2). I was very impressed with the professionalism with which the conference was executed, from the live translation of talks from English to Japanese, all the way down to the subtle touches like special lighting during the introduction of speakers.

Intelligent Light’s Yves-Marie Lefebvre showed off some features from the new FieldView version 16 (http://www.ilight.com/en/products/fieldview-16) early in the day. Two items that particularly intrigued me are their ability to export into 3D PDF format and their free XDBview software. It was my first exposure to 3D PDF, and it looks to be particularly useful when sharing and communicating results for CFD. Sometimes a quick pan and/or rotate around a 3D solution gets the message across when a series of flat images and words are failing (or, at best, taking much longer). I also noted that Boeing is part of the consortium of companies supporting the development and growth of 3D PDF. 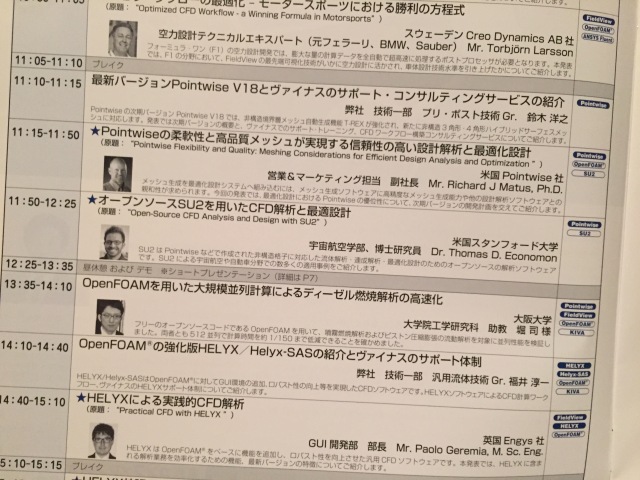 A partial shot of the VINAS UGM agenda for Day 1.

Rick Matus from Pointwise teased a number of features from the upcoming version 18 of their flagship software product along with several examples of the meshing package at work. As a developer of an unstructured CFD solver, I eagerly await the unstructured quad or quad dominant surface meshing coming in Pointwise V18. Couple that with T-Rex for automatically generating boundary layer-resolving meshes, and you might just get the best of both worlds: hex cells for accuracy where you need it most while maintaining efficient unstructured mesh construction around complex geometries.

Open-source software played a prominent role in the first day of the conference. After giving an overview of how the open-source SU2 suite can be used for CFD analysis and design optimization, I listened intently to back-to-back presentations by ENGYS’ Paulo Geremia on the HELYX software suite. HELYX is package for CFD design and optimization that is built around the open-source OpenFOAM library (http://engys.com/products/helyx). The presence of efficient adjoint-based methods for gradient-based optimization within HELYX (similar to methods we develop and apply within SU2) was particularly noteworthy for me.

Presenting the open-source SU2 suite and several design applications at the VINAS UGM 2015.

Talks by Torbjörn Larsson and Pierre-Jean Tardy offered an insider’s look at the cutting-edge engineering work within the Formula 1 industry. Strict F1 rules and regulations dictate how teams spend their time and energy in search of performance improvements. I have often heard about the heavy use of CFD throughout the sport, but the integration of CFD into their design processes went much deeper than I expected.

The full program for the VINAS Users Conference can be found here: http://www.vinas.com/en/ugm2015/program_day1.html.

Elsewhere in the Tokyo Area

Despite its large size and high population density (or perhaps made necessary because of it), Tokyo exhibits serious efficiency in its operation. You can sense the ebb and flow all around you in the sounds of hundreds of footsteps in the corridor of the train station or the sight of hundreds of people queueing up near the massive crosswalks (Shibuya Crossing being the most obvious example). The train system was impressive, and its vast web makes it easy to get just about anywhere around Tokyo with the combination of a train ride and a short walk. By the end of the week, even a foreigner like myself had a decent grip on the different lines and stations and felt comfortable getting around town. 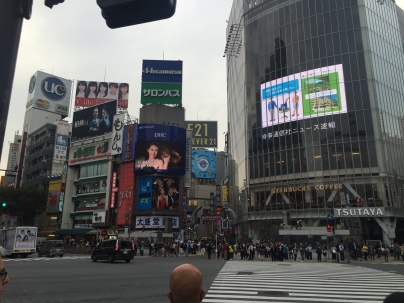 Queuing up at Shibuya crossing. We tried to count how many people crossed with each light from the windows of the Starbucks above. 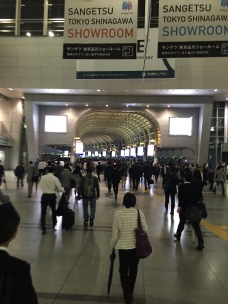 Lots of well-dressed folks still fill the train station corridors even at 9 pm.

By the way, the citizens of Tokyo take the commute mentioned above in style. Everywhere I looked, I saw well-tailored suits and dresses, stylish jackets and sweaters, and eye-catching accessories. This was yet another example of the attention to detail that I found throughout Japan.

A few additional items that struck me in and around Tokyo:

The unique architecture of the Mikimoto building in the Ginza district.

You can find an incredible assortment of fresh seafood at the Tsukiji fish market.

Overall, this trip had a little bit of everything, including unforgettable food, sights, and excellent technical content. I left with a great impression of Japan and its friendly people, and I am looking forward to my next visit.

I enjoyed meeting many new folks in the solver and visualization industries, and I hope that I have passed along some of our enthusiasm for open-source solvers through my presentation on SU2.

Lastly, I would like to thank Yasuhiko Fujikawa and his entire team at VINAS for being wonderful hosts and Heather McCoy, Rick Matus, and Carolyn Woeber from Pointwise for all of their time and energy spent showing me their favorite places in Japan and making me feel at home in a new place.

Disclaimer: The opinions above are entirely my own and not those of VINAS or Pointwise. I would also like to note that my travel expenses for attending the conference were generously covered by both companies.

Dr. Thomas D. Economon is a Postdoctoral Scholar at Stanford University, where he received MS and PhD degrees in the Department of Aeronautics & Astronautics. He holds a BS in Aerospace Engineering from the University of Notre Dame. His research interests include computational fluid dynamics, optimal shape design via adjoint-based methods, and high performance computing. He serves as the co-lead developer of the open-source SU2 CFD suite.

This entry was posted in Events, People & Places and tagged FIeldView, Pointwise, SU2. Bookmark the permalink.