Drawing Curves on Geometry Without a Parametric Space – New in Pointwise V18.1

Drawing curves on the geometry model is a lot more flexible in the latest Pointwise release because it can now be done when the model lacks a consistent parametric space (like a solid model comprised of a complex quilting of trimmed surfaces) or lacks a parametric space entirely (like a faceted model from an STL file).

How many times has this happened to you? You are drawing a connector (a curve) on a surface in the geometry model to impose a grid boundary at a specific location. Perhaps this curve needs to be part of your mesh’s topology or you will use it to control mesh clustering in a specific location or you need a line in a certain location so mesh points go through pressure tap locations.  Regardless of the need, you click to add a point, move the cursor, click to add a point, move the cursor – and you bump up against a surface boundary you cannot cross. 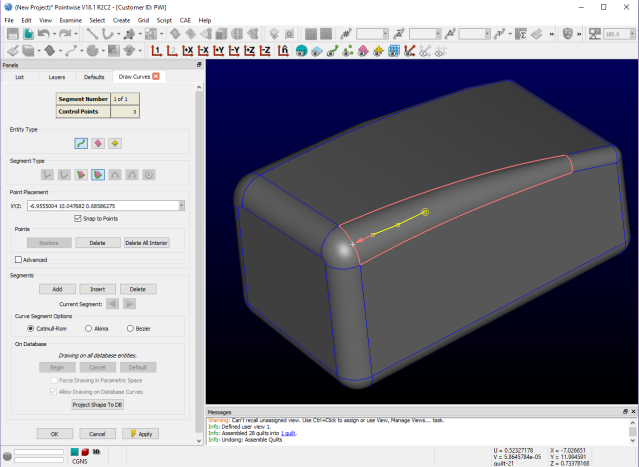 The cursor (white +) used to get stuck at the boundary of a parametric space (pink outline) when drawing a curve (yellow) on a geometry model (gray).

When this happened, you would have to save the current segment and add a new segment on the next geometry model surface. For geometry models with lots of surfaces this could get tedious and the resulting curve would have as many segments as parameter spaces it crossed.

The reason this happens is quite simple. When drawing a curve constrained to the database (geometry model) you are actually drawing in the (u,v) parametric space of the geometry surface as opposed to drawing directly in (x,y,z) in 3-D. Because adjacent surfaces rarely or never have (u,v) spaces that are aligned and continuous, drawing had to stop at surface boundaries to transition to the next (u,v) space.

However, in Pointwise Version 18.1 the new default mode for curve drawing on the geometry model lifts the requirement of a consistent (u,v) space.

The On Database frame within the Draw Curves panel includes an option (off by default) to enable the old behavior: Force Drawing in Parametric Space. The new default method is independent of parametric space.

Repeating the example shown above in Pointwise Version 18.1 shows the new behavior by which a single curve is drawn across multiple surfaces in the model.

By being able to draw freely across multiple parametric spaces, a smooth curve (yellow) can be drawn across multiple underlying surfaces (pink outlines) in the geometry model (gray).

The example above demonstrated this new “parameter free” curve drawing on a solid model comprised of multiple trimmed NURBS. There’s another scenario in which this new capability is very helpful and that’s drawing on faceted models, what Pointwise calls shells.

A shell is simply a surface mesh, usually triangles, as you might import from an STL file. Unlike a B-Rep NURBS model which has multiple independent parameter spaces, the shell has no parameter information whatsoever making it a perfect application for this new parameter-free curve drawing.

Drawing a curve (green) on a faceted surface (pink) is now as easy as drawing on NURBS.

If you’re a current customer, head directly to the downloads page on our website to start using Pointwise V18.1 and its new parameter-free curve drawing.

If you’re new to Pointwise, now is the time to request a free trial license to try this new feature and all the other features in the software to generate your own meshes.

The geometry models used in this post both came from GrabCAD. The mechanical part is swept and variable radius by subbu Mech. The STL terrain model is Mt. Wheeler & Davis by Rhett Thys.

This entry was posted in News, Software and tagged geometry models, Pointwise. Bookmark the permalink.