Yes, you read that correctly. You can now create Pointwise grid import plugins!

The sections below will give a brief explanation of the changes made to the Pointwise Plugin SDK.

What is a Pointwise Plugin?

Not a Pointwise Plugin

Before we dive into the SDK changes, I thought I should answer the question “What is a plugin?”

In computer science jargon, a plugin is an independently compiled, binary library that can be loaded selectively and used by an application to extend its functionality.

As implemented by the Pointwise Plugin SDK, a Pointwise plugin gives you the ability to add a support for exporting a new CAE solver format or importing a new grid format. This added functionality integrates seamlessly into to both the Pointwise graphical user interface (GUI) and Glyph scripting language. And best of all, you can add this new functionality without any involvement from the Pointwise staff (unless you want it).

Deploying a Pointwise plugin is as simple as dropping a finished plugin library file into the /plugins/ folder of your Pointwise installation. The next time Pointwise starts, the new functionality will be available in the Pointwise GUI and at the command line using the Pointwise Glyph Tcl shell.

Structured vs. Unstructured Grid Data Hierarchy [Editor’s note: This image was updated after the blog post was published in order to correct a typographical error.]

Most of the changes made to the CAE Export API were internal, structural changes. For example, the following data types, now used by both the grid import and CAE export plugins, were renamed and moved to the apiPWP.h header file.

Appropriate aliasing macros were added that provide backward compatibility with existing CAE exporter plugin code. However, the old type names are deprecated and the aliasing macros may be removed in a future SDK release.

Another recent addition to CAE export API is support for shadow (non-inflated) BC types. If an internal baffle patch or block-to-block connection patch is tagged with a shadow BC type, it will not be inflated into a zero volume thin wall during export. Non-inflated BC types are often used by solvers to approximate physical phenomena such as a pressure drop across a propeller or energy exchange across a fluid/solid barrier.

In the image below, the top domain represents the set of exported elements if they are not inflated. The bottom domain shows the topology of the “thin wall” inflated domain. The circled pairs of points in the inflated domain are actually at the same XYZ location. They are drawn apart on the image to make the exported topology more obvious. The new (inflated) yellow points are used to create distinct elements with an opposing orientation on the “other” side of the domain. 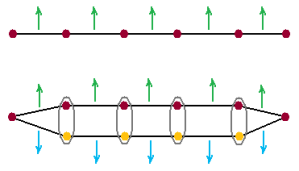 Inflation of a baffle domain during export

Shadow BCs are specified in a plugin by calling the caeuAssignInfoValue() in the plugin’s runtimeCreate() C function or PluginName::create() C++ method. The code below shows how the ANSYS Fluent CAE plugin defines its shadow BC types.

The mkplugin script is distributed as part of the Pointwise Plugin SDK distribution. The script has been updated to support the creation of grid import plugin projects. Also, the CAE exporter plugin options have been renamed.

The script usage is as follows:

To help with your plugin development efforts, you can now find the production source code for the following five plugins on the Pointwise github page.

These fully functional plugins will make a good starting point for your CAE export or grid import plugin.

In part 2 of this 4-part series, you will learn how to write an importer for unstructured grids.