This Is Your Year to Win The Meshy Award

At the Pointwise User Group Meeting 2018 in Fort Worth on 14-15 November 2018 we will be recognizing a mesh with the coveted Meshy Award for its visual appeal, originality, and uniqueness. The prior winners of this prestigious award exemplify all three of those attributes and after you’ve seen them we hope you’ll be driven to do even better.

Meshing. A means to an end. A necessary evil. The onerous part of the CFD process. Thankless. Immediately forgotten. Always blamed. Or as I joke, meshing exists to make turbulence modeling seem respectable.

Isn’t it time meshing was celebrated for its own sake? For its brilliant combination of technology, craft, and art? For the engineering effort?

That’s why we created The Meshy Award. And at this year’s Pointwise User Group Meeting we will once again bestow this award on one very lucky recipient. Read on to see those who have come before and triumphed. 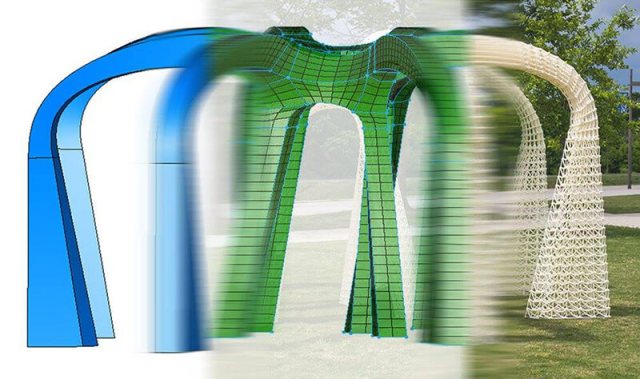 Branch Technology continues to be one of the most unique applications of mesh generation that Pointwise has encountered. The Chattanooga-based firm is an “architectural fabricator specializing in large-scale 3-D printing,” a technology that they use to revolutionize built spaces.

Their work on the Cheekwood Gardens pavilion (by C. Bruce Hilbert, Ph.D. and Melody Rees) in Nashville (illustrated above) earned them the Meshy Award 2016 not only for the uniqueness of the application, but for the innovative way they have made meshes tangible at the human scale. The image above highlights the path from geometry model to mesh to installation of the fabricated piece.

Branch Technology has gone on to fabricate a variety of architectural-scale forms including the world’s largest 3-D printed structure at 40 feet wide and 20 feet tall.

A photo album on our Facebook page shows all of the Meshy Award entries for 2016. 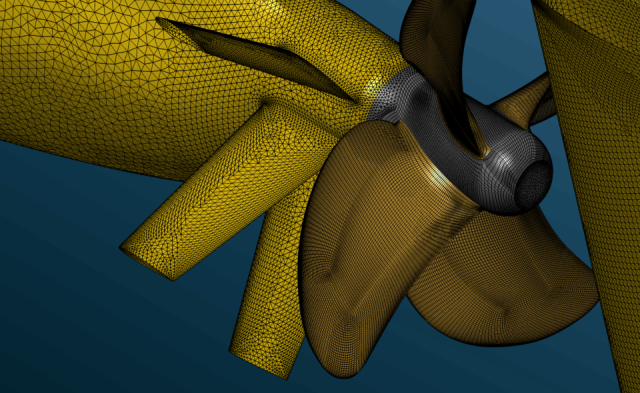 Prof. Rickard Bensow of Chalmers University of Technology generated hybrid meshes for a study of how cavitation on a ship propeller is affected by the installation upstream of energy efficiency improving stator blades that change the propeller inflow.

Dr. Bensow’s mesh illustrates the efficient application of a several meshing techniques within the same grid in a way that allows the physics of this complex flowfield to be captured effectively and accurately.

An album of 2014’s Meshy Award candidates is available in a photo album on our Facebook page.

The grid was constructed in seven parts comprising the inlet, impeller, leakage flow paths, diffuser, collector, and discharge flow paths. Several meshing strategies were used in the various parts including all hex, hybrid tet-prism, and T-Rex mesh topologies.  The final grid consisted of 21.5 million cells within a topology of 950 blocks. Seven-hundred forty-eight of the blocks contained 13.6 structured hex cells, while the remaining cells came from 202 unstructured blocks

This grid reflects a deep understanding of the meshing requirements for this complex flow and geometry and demonstrates superior Pointwise proficiency that vividly illustrates the possibilities with the software.

Meshy Award entries from 2013 are displayed in a photo album on our Facebook page.

Dr. Michael Böttcher’s meshes demonstrate a profound understanding of the physics of his problem, an expertise in the Pointwise meshing software, and the ability to present results in a straightforward yet elegant way.

To see all the Meshy Award entries from 2011, see this photo album on our Facebook page.

Your mesh is deserving of recognition with The Meshy Award, isn’t it? We’re accepting entries until 26 September. Now’s the time to create some glamour shots of your meshes and send them in. See the Meshy Award page on our website for all the details.