The Evolution of Computational Aerospace from 1968-2018 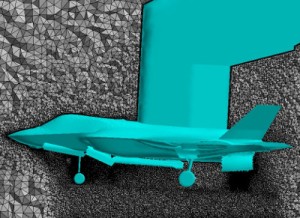 Sometimes you write something that ends up on the cutting room floor (as my film-loving friends might say). Such is the case with an article I was asked to write for the 50th anniversary of the Society of Flight Test Engineers in 2018. Alas, plans change and the article went unused. I thought it turned out OK so I figured we could share it here even though its target audience isn’t necessarily the same as this blog’s readership. Therefore, I ask that you forgive some of the generalizations.  (Image shown to the right is from one of the references cited herein.)

In the beginning there was the airfoil. Or more specifically, in 1968 it became clear that something new was needed to help design supercritical airfoils and wings. Today in 2018 there is serious planning for aircraft certification by simulation and for maintaining an accurate digital representation of each aircraft or aircraft part (the so-called “digital twin”). In this 50th anniversary year [ed. note: this was meant to be published in 2018] of the Society of Flight Test Engineers it is useful to assess the evolution of computational aerospace, specifically computational fluid dynamics (CFD), during the same decades. While constraints on this article’s length dictate it will be too shallow to serve as a rigorously accurate history, extrapolations will be made about how CFD and flight test will continue to co-evolve.

The co-evolution of CFD and flight test, whether historical or prognosticated, is not meant to inject anything into the current debate over whether computation, especially digital computation, qualifies as the third leg of science alongside theory and experimentation (Reference 1). Instead, the position is taken that computation and flight test should be considered along with theory and wind tunnel test as pragmatic tools that provide quantitative insight into how and why an aircraft performs relative to its design intent.

Furthermore, it is interesting to note that CFD and flight test have traditionally bracketed an aircraft’s manufacture.  CFD contributed predominantly to the aircraft’s up-front design while flight test verified the aircraft’s performance as built. Yet, there are crossovers. CFD is sometimes called upon to explain test and flight anomalies and test data is used to validate CFD results.

CFD in the 1970s: One excellent milepost marking the beginning of applied CFD’s evolution was the development in 1974 of Antony Jameson’s FLO22 code (Reference 2) for 3-D swept wing design (with development of its precursors 1-21 beginning in 1970). FLO22 fundamentally changed wing design at several organizations and is still in use today because of its accuracy and its relatively quick computational speed. 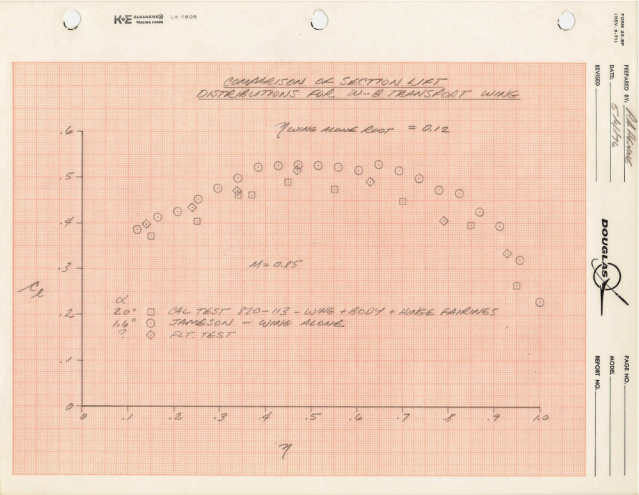 CFD in the 1980s: The decade of the 1980s may be considered the flowering of CFD as the foundational developments of the prior decade and a half saw expression in software implementations – primarily in-house development efforts – throughout the aerospace industry in government laboratories, academia, and industry. For examples, see Reference 3. These methods, primarily based on structured hexahedral grids, had already assumed a highly practical focus on delivering aircraft performance data. These early tools had also identified some of the barriers to making CFD a practical tool: complex geometry, excessive time to mesh, and the curse of graphics – the latter leading to the pejorative nickname “colorful fluid dynamics.” Yet the long-term potential for this technology became clear as evidenced by the founding of the NASA Advanced Supercomputing (NAS) Division (originally Numerical Aerodynamic Simulation – see image for proof) at NASA Ames Research Center in the mid-1980s. NAS enjoyed a virtually instantaneous reputation as a leadership hub for the development of CFD. 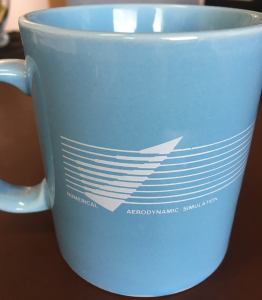 CFD in the 1990s: As the calendar transitioned into the 1990s, CFD transitioned (not completely, of course) into a commercial software industry. As of 2015, this commercial market had exceeded one billion US dollars in aggregate revenue (Reference 4). This should not have been a surprise as commercialization is perhaps best positioned (relative to government funding) to deal with the growing demands on CFD software – the details of supporting computing hardware ranging from desktops to supercomputers, writing documentation and providing user support that mature codes require, funding the types of research for which the U.S. government wasn’t paying (either because it was too applied or because the budgets just weren’t there at the time).  CFD software also began the trek from structured grids to unstructured meshes during this same time period, the latter promising to address the oft-cited concern about meshing time.

CFD After 2000: CFD’s successes became well known with Boeing and Airbus (notable among others) citing reductions in wind tunnel testing (50% for Boeing) and describing extensive application of CFD to components of their latest aircraft well beyond the just the airfoil and wing. Despite these successes, it was observed that CFD had stagnated for the first years of the new century, relying on techniques developed in the 1980s and 1990s (Reference 5) that limited its range of applicability. The types of flowfields pointed to as beyond the capabilities of CFD (in other words, those for which testing will be critical) include rotorcraft, high-lift systems, and more. Rising interest in hypersonics will need to rely heavily on CFD due to the difficulty in obtaining ground and flight test data.

CFD Technology: Challenges abound for the evolving use of computational simulation beginning with the core numerical algorithms. Initially based on finite differences, these algorithms evolved into finite volume techniques and most recently there is keen interest in finite element techniques (predominant in solid mechanics). Solver algorithms have evolved from central differences to upwinding to flux vector splitting and now flux difference splitting and Riemann solvers.

The form of the fluids equations solved has become more complex, evolving from potential and inviscid flows to thin-layer formulation of the Navier-Stokes (N-S) equations, parabolized N-S, to Reynolds Averaged N-S, each with (potentially) increasing fidelity. Turbulence modeling continues to vex N-S solvers with the Spalart-Allmaras model being the pinnacle of this technology. Yet we continue to strive for direct simulation of turbulence with vast amounts of new research in large eddy simulation (LES), detached eddy simulation (DES), and direct numerical simulation (DNS) offering model-free fidelity that offers a path to accurate CFD simulations near the boundaries of an aircraft’s performance envelope (i.e. separated flow).

For these and other issues related to the evolution of CFD technology, a series of workshops from the American Institute of Aeronautics and Astronautics (AIAA) has been instrumental in assessing state of the art and pointing to the path forward. The grandfather of these workshops is the Drag Prediction Workshop which was followed (not in this order) by High Lift Prediction, Geometry and Mesh Generation, Sonic Boom Prediction, Shock Wave Boundary Layer Interaction, Airframe Noise, and Aeroelasticity. 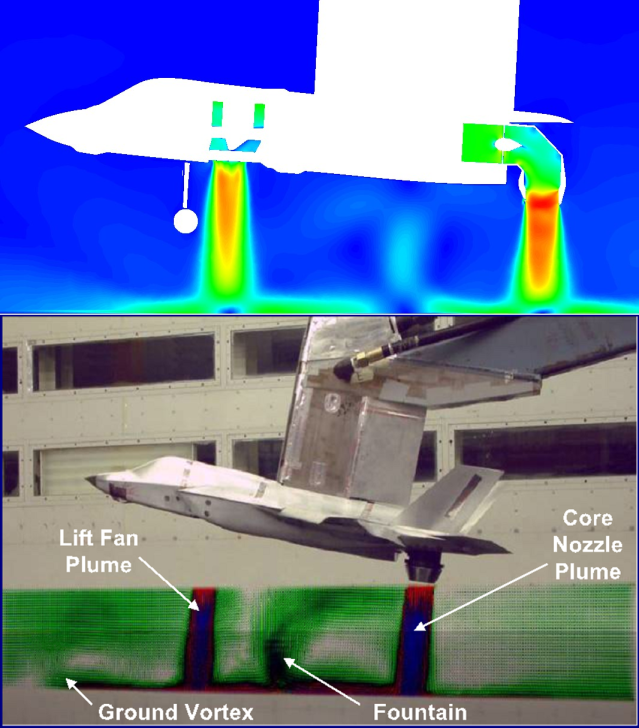 Figure 2: Computations (top) and tests (bottom) were used in tandem to great benefit during the design of the F-35 Lightning II as described in Reference 6. Image used with permission of the authors.

CFD’s Future: As we turn our attention from history to future, two ongoing efforts can help guide our way. NASA captured the CFD field’s attention with the publication in 2014 of the CFD Vision 2030 Study. Funded by NASA and authored by a blue-ribbon panel of experts, the study’s purpose was to develop a forecast and strategy for achieving by the year 2030 a CFD capability that is automated, controls uncertainty, is computationally fast, and allows for cross-disciplinary applications (Reference 7). CFD applications envisioned in 2030 include full aircraft simulations across the entire flight envelope, turbofan engine transients, multi-disciplinary optimization of an advanced aircraft, and powered space access.

The CFD Vision 2030 Study’s desires for automation and trustworthiness in engineering simulation software are further amplified by the ASSESS Initiative (Reference 8), a multi-industry and multi-themed group striving to increase the availability and utility of engineering simulation software with an overt focus on achieving business goals. Broader than just CFD, ASSESS echoes the Study’s call for automation in their theme for democratization, the call for uncertainty quantification in their theme for credibility, and more.

CFD and Flight Test: An exciting development has occurred only recently. The AIAA has formed a Community of Interest, open to all, on the topic of Certification/Qualification by Analysis (CQbA) with a specific goal of reducing verification flight testing costs. Here we see the convergence of two disciplines, computation and flight test, that have evolved mostly along parallel paths for five decades.

To a certain degree, CQbA may be seen as addressing a century-old goal documented in NACA’s first annual report from 1915 (Reference 9). The report assigned “immediate importance” to “the reduction to practical form of the analytical methods of determining the stability of aeroplanes from design data, without necessarily requiring wind tunnel tests or full sized tests of the same.” Laudable as this long-sought goal may be, Richard Feynman cautions against taking an “either/or” position with respect to simulation and testing (Reference 10): “People who wish to analyze nature without using mathematics must settle for a reduced understanding.” Yet the limitations of our mathematics are precisely the reason testing will remain its symbiotic cousin as noted in an Aerospace America article published serendipitously as this article was being finalized (Reference 11).

Computational aerospace may have started with the airfoil but it has evolved into a suite of tools that has significantly and irreversibly changed how aircraft are designed. The tools and methods are mature enough and instill sufficient confidence to reduce the amount and cost of testing allowing better products to be brought to market sooner. As computational tools evolve over the coming decades with the guidance of efforts such as ASSESS and the CFD 2030 Vision Study, they will surely complement flight testing in ways that result in high-performing vehicles for operators and solid business performance for manufacturers and designers.

8 Responses to The Evolution of Computational Aerospace from 1968-2018