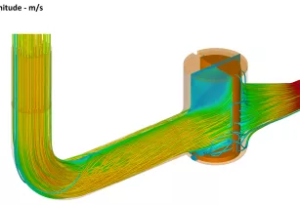 Analytical Graphics will integrate ANSYS’ simulation technology into tools for the development of missile defense systems. Image from develop3d.com.

When you’ve seen as much “mesh like” art as I have you start to see some general themes repeated in your perception of it and the artist’s intention for it. The faceting is often an allusion to the digitization of modern life which is contrasted with the use of traditional materials or a traditional context. That’s not to say I’m trying to put all these artists into a neat and tidy mesh box, just that these are the patterns I’ve observed. And my observations could be way off base.

Such is the case with Martin Puryear (see Brunhilde below). Wood is his medium which ties his sculptures to the natural world. The form is voluptuous despite the rigid faceting. The openness of the weave gives the piece a great deal of weightlessness despite appearing to have stable heft.

One of Puryear’s works, Ladder for Booker T. Washington, is a signature piece in the collection of the Modern Art Museum of Fort Worth. A curator told me the sides of this 36 foot tall sculpture are crafted from a single tree branch split down the middle lengthwise.

Bonus: The Rhind Mathematical Papyrus is a math textbook by Ahmose in Egypt from 1550 BC on which 84 examples of fractions, geometry, and other computations are documented. Or maybe the professor said you could bring one sheet of notes to the final exam. Either way, very cool.

Detailed view of one section of the Rhind Mathematical Papyrus from the collection of the British Museum. Image from britishmuseum.org. See link above.